2: Weak personnel. After motivation, either the individual capabilities of the team members or their relationship as a team probably has the greatest influence on productivity (Boehm 1981, Lakhanpal 1993). Hiring from the bottom of the barrel will threaten a rapid-development effort. In the case study, personnel selections were made with an eye toward who could be hired fastest instead of who would get the most work done over the life of the project. That practice gets the project off to a quick start but doesn’t set it up for rapid completion. LOCATION: 1793

Uncontrolled problem employees. Failure to deal with problem personnel also threatens development speed. This is a common problem and has been well-understood at least since Gerald Weinberg published Psychology of Computer Programming in 1971. Failure to take action to deal with a problem employee is the most common complaint that team members have about their leaders (Larson and LaFasto 1989). In Case Study: Classic Mistakes, the team knew that Chip was a bad apple, but the team lead didn’t do anything about it. The result—redoing all of Chip’s work—was predictable. LOCATION: 1798

Heroics. Some software developers place a high emphasis on project heroics (Bach 1995). But I think that they do more harm than good. In the case study, mid-level management placed a higher premium on can-do attitudes than on steady and consistent progress and meaningful progress reporting. The result was a pattern of scheduling brinkmanship in which impending schedule slips weren’t detected, acknowledged, or reported up the management chain until the last minute. A small development team and its immediate management held an entire company hostage because they wouldn’t admit that they were having trouble meeting their schedule. An emphasis on heroics encourages extreme risk taking and discourages cooperation among the many stakeholders in the software-development process. LOCATION: 1808

13: Wishful thinking. I am amazed at how many problems in software development boil down to wishful thinking. How many times have you heard statements like these from different people: "None of the team members really believed that they could complete the project according to the schedule they were given, but they thought that maybe if everyone worked hard, and nothing went wrong, and they got a few lucky breaks, they just might be able to pull it off." "Our team hasn’t done very much work to coordinate the interfaces among the different parts of the product, but we’ve all LOCATION: 1887

20: Shortchanged upstream activities. Projects that are in a hurry try to cut out nonessential activities, and since requirements analysis, architecture, and design don’t directly produce code, they are easy targets. On one disastrous project that I took over, I asked to see the design. The team lead told me, "We didn’t have time to do a design." LOCATION: 1949

The results of this mistake—also known as "jumping into coding"—are all too predictable. In the case study, a design hack in the bar-chart report was substituted for quality design work. Before the product could be released, the hack work had to be thrown out and the higher-quality work had to be done anyway. Projects that skimp on upstream activities typically have to do the same work downstream at anywhere from 10 to 100 times the cost of doing it properly in the first place (Fagan 1976; Boehm and Papaccio 1988). If you can’t find the 5 hours to do the job right the first time, where are you going to find the 50 hours to do it right later? LOCATION: 1956

22: Shortchanged quality assurance. Projects that are in a hurry often cut corners by eliminating design and code reviews, eliminating test planning, and performing only perfunctory testing. In the case study, design reviews and code reviews were given short shrift in order to achieve a perceived schedule advantage. As it turned out, when the project reached its feature-complete milestone it was still too buggy to release for 5 more months. This result is typical. Shortcutting 1 day of QA activity early in the project is likely to cost you from 3 to 10 days of activity downstream (Jones 1994). This shortcut undermines development speed. LOCATION: 1969

24: Premature or overly frequent convergence. Shortly before a product is scheduled to be released, there is a push to prepare the product for release—improve the product’s performance, print final documentation, incorporate final help-system hooks, polish the installation program, stub out functionality that’s not going to be ready on time, and so on. On rush projects, there is a tendency to force convergence early. Since it’s not possible to force the product to converge when desired, some rapid-development projects try to force convergence a half dozen times or more before they finally succeed. The extra convergence attempts don’t benefit the product. They just waste time and prolong the schedule. LOCATION: 1987

26: Planning to catch up later. One kind of reestimation is responding inappropriately to a schedule slip. If you’re working on a 6-month project, and it takes you 3 months to meet your 2-month milestone, what do you do? Many projects simply plan to catch up later, but they never do. You learn more about the product as you build it, including more about what it will take to build it. That learning needs to be reflected in the reestimated schedule. LOCATION: 2001

28: Requirements gold-plating. Some projects have more requirements than they need, right from the beginning. Performance is stated as a requirement more often than it needs to be, and that can unnecessarily lengthen a software schedule. Users tend to be less interested in complex features than marketing and development are, and complex features add disproportionately to a development schedule. LOCATION: 2023

29: Feature creep. Even if you’re successful at avoiding requirements gold-plating, the average project experiences about a 25-percent change in requirements over its lifetime (Jones 1994). Such a change can produce at least a 25-percent addition to the software schedule, which can be fatal to a rapid-development project. LOCATION: 2027

One database that is a magic integrator of everything else. In a traditional application (circa 2019), most application store all the data in a central store. For example, user data and application data are stored in the same database.

Moving Beyond a Database

"We need to learn how to do application Architecture with API’s not databases."

Software Engineering in the Cloud 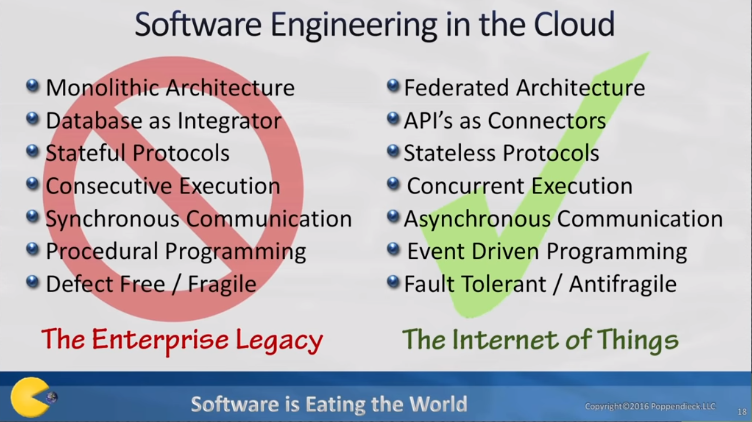 We poke the system, and then respond to the small contained poke. 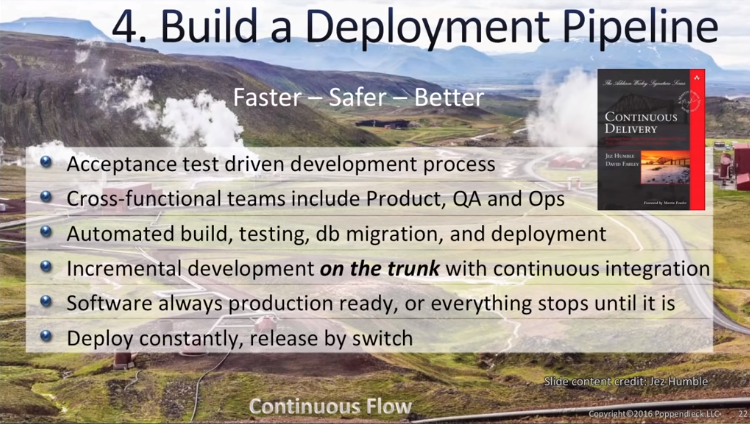 Get the product feedback to the stakeholders.

Likely 2/3 of the features are unnecessary. 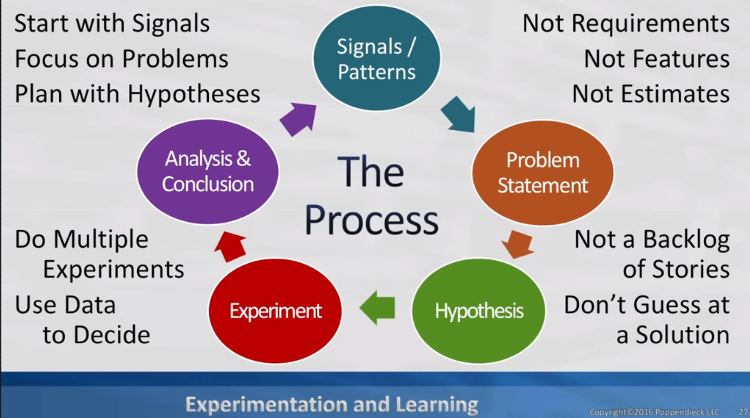 Conformity Bias: Those who think they are in the minority self-silence 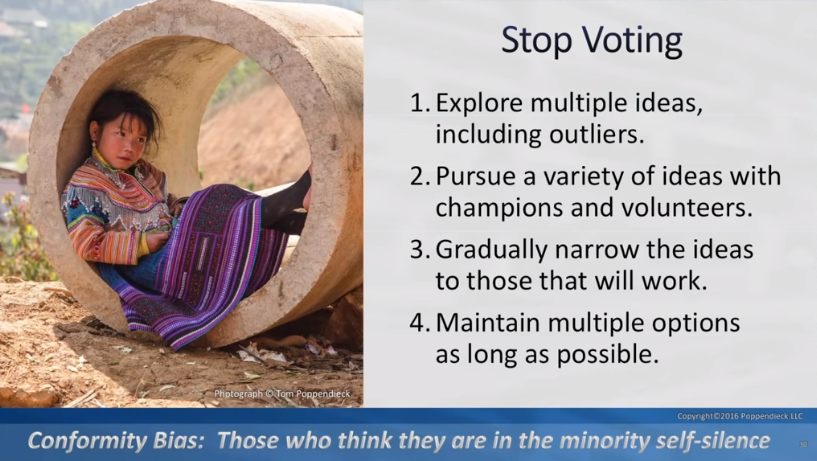 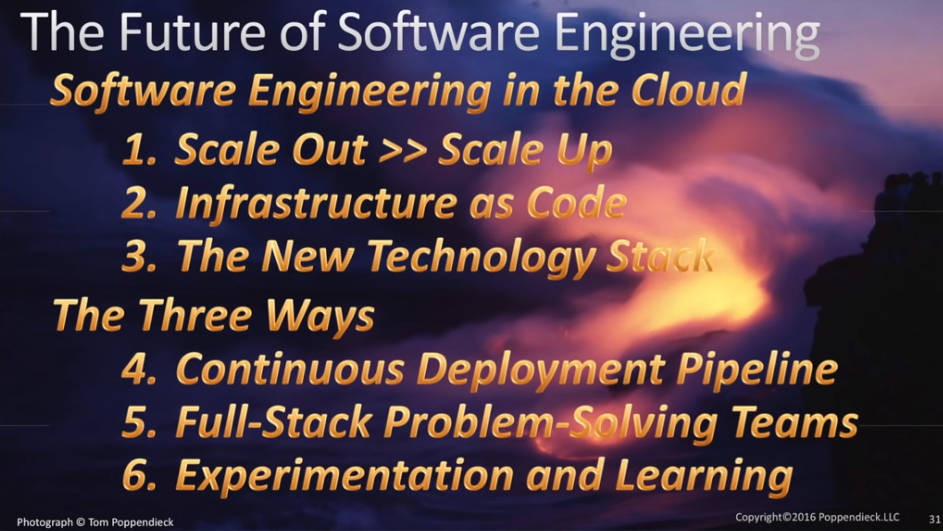 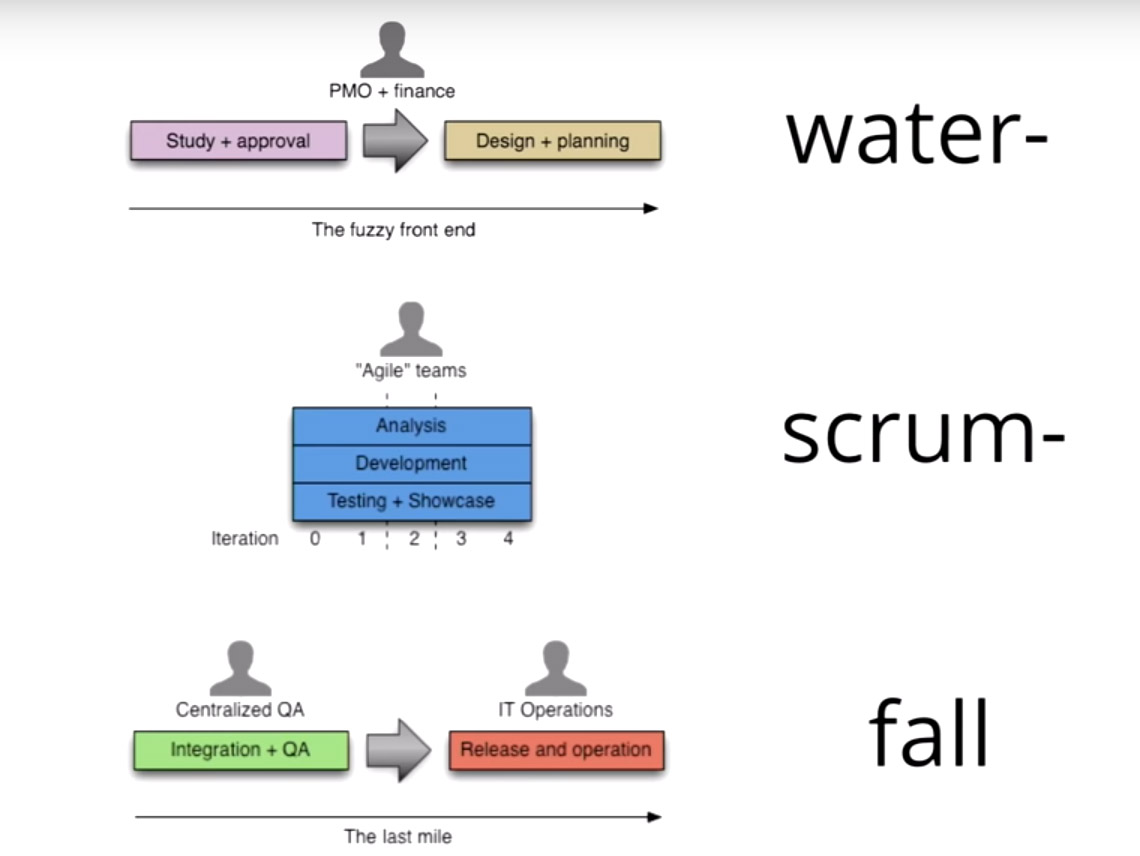 Design and product discovery usually is defined upfront, which is not agile, adding an agile development process in the middle isn’t all the benefits, especially with the testing and the deployment not part of the process.

Estimating the amount of work

What Should We do

A tool that maps the impact of the outcome. We work back from the outcome to the code of adding the feature.

The important thing is the shared understanding of the thing you’re building, not the artifacts, which agile emphasizes. This means the developers understanding the "Why" behind something, instead of tossing tasks over the cubical wall.

Pick a task with the smallest amount of work for the biggest outcome. "Minimize output, maximize outcome" – Jeff Geofels 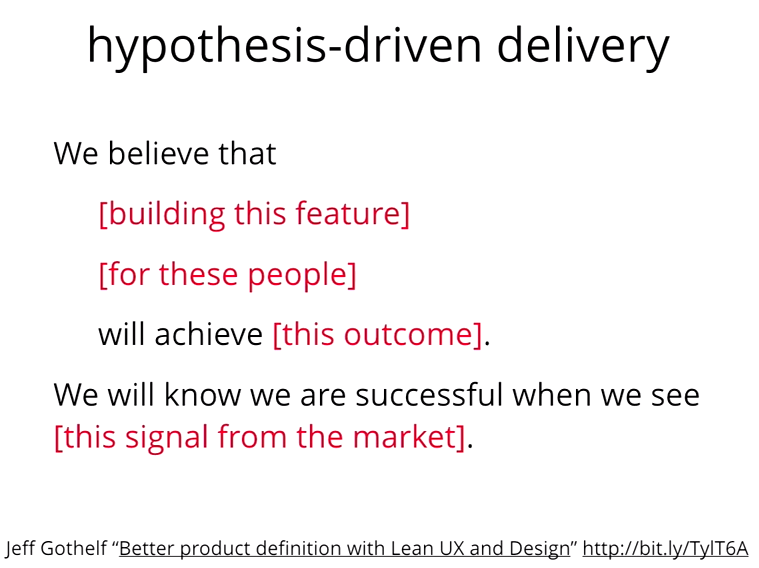 Is about delivering things in a way that will satisfy our customers. The hard part is trying to discover what the customers want without sinking a whole ton of money into discovering, because, then you might get sucked into the sunk cost fallacy, where you’ve put a ton of money into a solution, and because of this, it’s the correct approach. 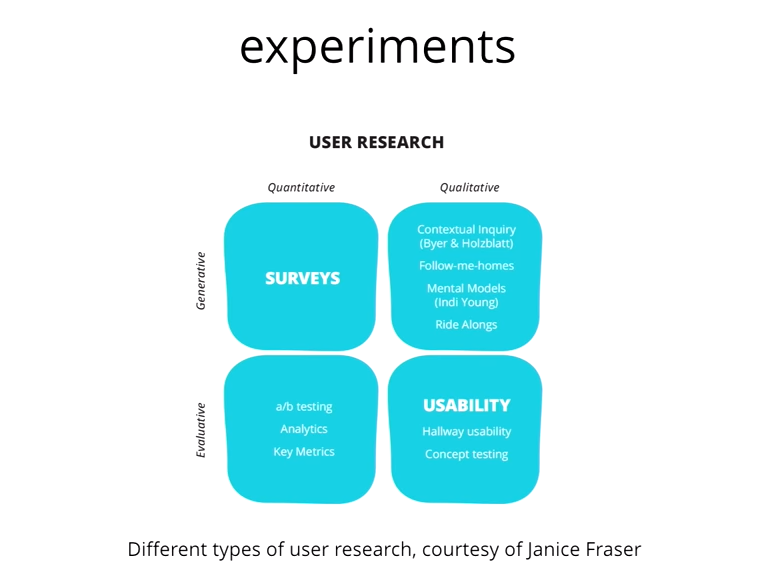 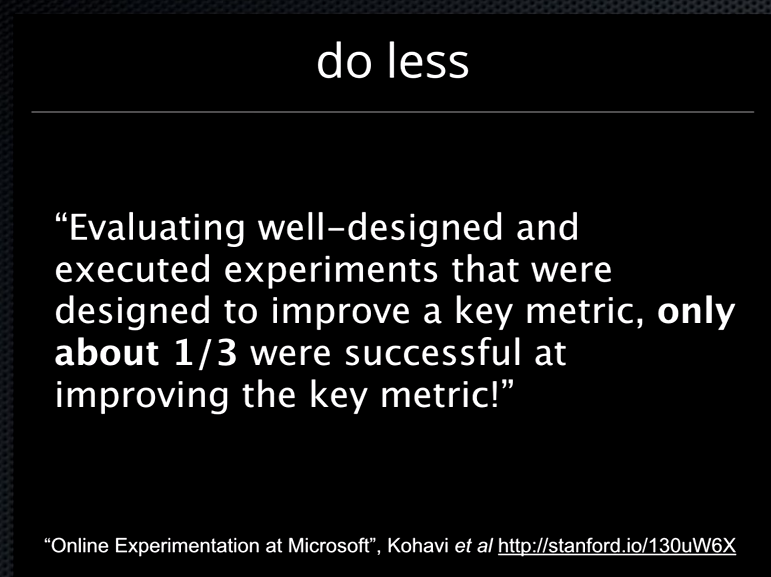 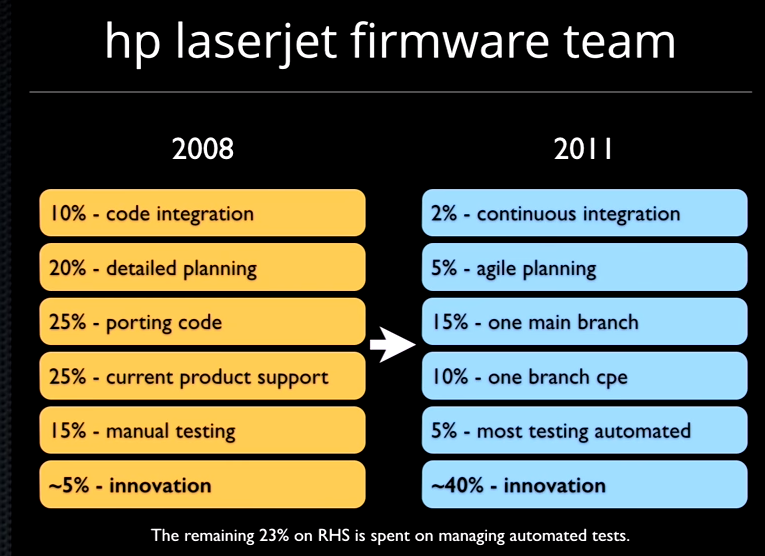 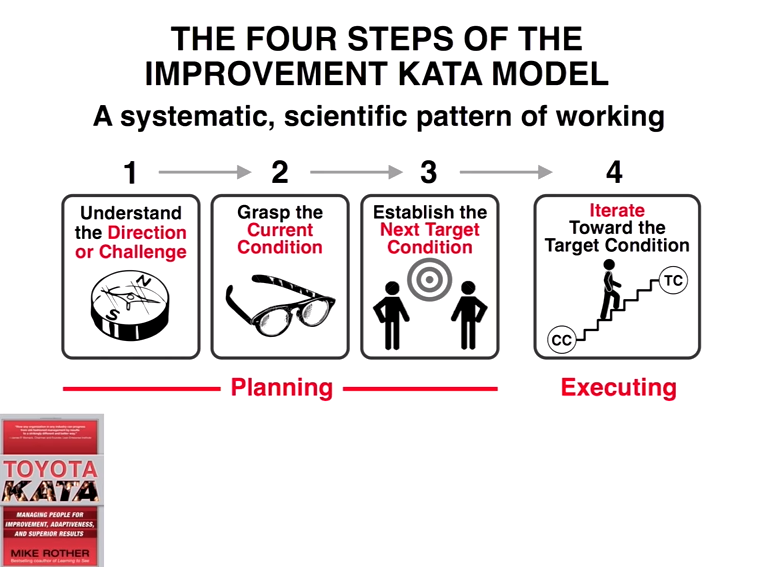 If you’re not constantly improving, you are degrading.

To get started, start with your job and then start networking with people in the company to understand their pain points.